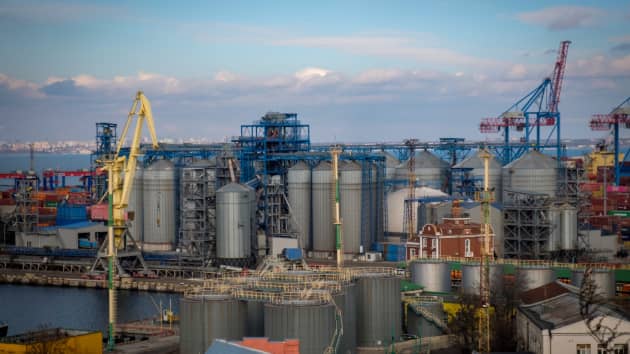 Oil prices gave up most of their big overnight gains in a wild session, briefly dipping into negative territory after surging above $130 earlier in the session.

On Sunday evening, prices jumped as trading began with the market reacting to supply disruptions stemming from Russia’s ongoing invasion of Ukraine and the possibility of a ban on Russian oil and natural gas.

But prices later retreated, in a move that Rebecca Babin, a senior energy trader at CIBC Private Wealth, attributed to comments out of Germany that the nation is reluctant to ban Russian energy imports.

“Crude is coming off the highs following comments from Germany saying they have no plans to halt Russian energy imports, indications that the US is exploring replacement barrels from Venezuela and Saudi Arabia,” she said.

“Probably the most important takeaway from the trading action this morning is that this situation is extremely fluid,” she added.

West Texas Intermediate crude futures, the U.S. oil benchmark, at one point spiked to $130.50 Sunday evening, its highest since July 2008, before retreating.

“Oil is rising on the prospect for a full embargo of Russian oil and products,” said John Kilduff of Again Capital. “Already high gasoline prices are going to keep going up in a jarring fashion. Prices in some states will be pushing $5 pretty quickly.”

The U.S. and its allies are considering banning Russian oil and natural gas imports, Secretary of State Antony Blinken said in an interview with CNN’s “State of the Union” on Sunday.

“We are now talking to our European partners and allies to look in a coordinated way at the prospect of banning the import of Russian oil while making sure that there is still an appropriate supply of oil on world markets,” he said. “That’s a very active discussion as we speak.”

Meanwhile, Speaker Nancy Pelosi said in a letter to Democratic colleagues on Sunday evening that the U.S. House of Representatives is “exploring strong legislation” to ban the import of Russian oil — a move which would “further isolate Russia from the global economy.”

“Our bill would ban the import of Russian oil and energy products into the United States, repeal normal trade relations with Russia and Belarus, and take the first step to deny Russia access to the World Trade Organization.  We would also empower the Executive branch to raise tariffs on Russian imports,” she wrote.

While Western sanctions against Russia have so far allowed the country’s energy trade to continue, most buyers are avoiding Russian products already. Sixty-six percent of Russian oil is struggling to find buyers, according to JPMorgan analysis.

The U.S. average for a gallon of gas topped $4 on Sunday, according to AAA, in a rapid movement due to the conflict. The underlying cost of oil accounts for more than 50% of the cost of gas that consumers put in their cars.