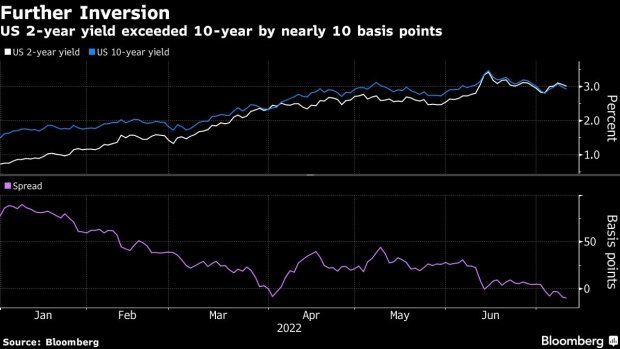 One of the US bond market’s most widely watched indicators of
potential recession risk has reached levels last seen in 2007.

The yield on the benchmark 10-year Treasury note moved to be as much
as 10 basis points below the 2-year rate, eclipsing the
9.5-basis-point gap reached in early April.

So-called inversions of the yield curve — situations in which
longer-term rates are below those on shorter-dated maturities — are
often seen by observers as a potential harbinger of recession, and the
spread between 2 years and 10 years is one of the most widely watched.
The last time this particular yield curve was inverted was in 2007,
before the financial crisis of 2008-2009.

The current inversion comes amid increasing concern that measures
taken by central banks to rein in inflation might end up putting the
economy into recession. That fear has helped drive a rebound in
Treasury prices that’s taken the benchmark 10-year rate from around
3.5% in mid-June to around 2.91% on Tuesday. The two-year yield,
meanwhile, was around 3.01%.