Home » These states are raising their minimum wages in 2023. Chart shows where workers can expect higher pay

These states are raising their minimum wages in 2023. Chart shows where workers can expect higher pay 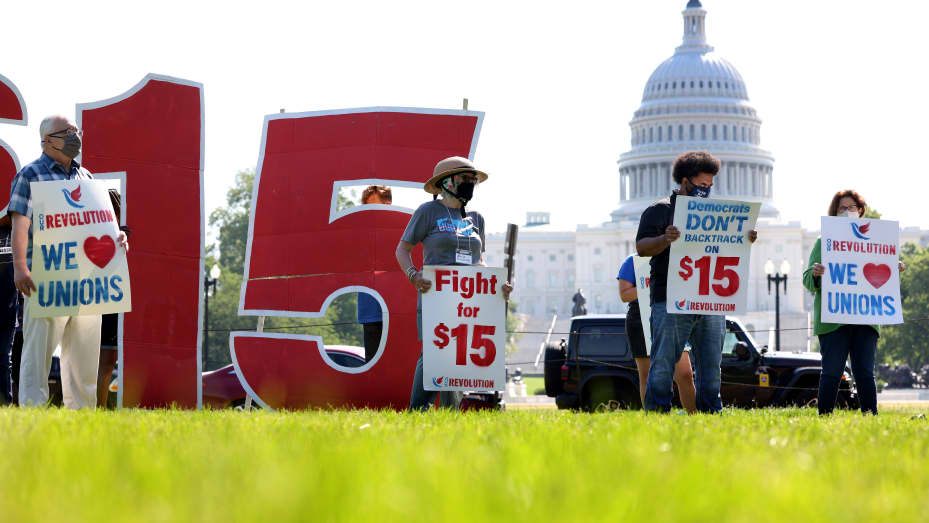 As the calendar turns to 2023, workers in more than half of all states have something to look forward to this year: a higher minimum wage.

That’s occurring as the federal minimum wage stands pat at $7.25 per hour — the same rate since 2009.

But many states and cities have put their own rates in place, and most of them are poised to increase in the new year.

A total of 26 states have announced that higher minimum wages will be introduced during 2023, with one more state likely to see an adjustment in July, according to research from payroll experts at Wolters Kluwer Legal & Regulatory U.S.

Meanwhile, 23 states and Washington, D.C., according to the Economic Policy Institute, will implement higher minimum wages on Jan. 1. Those increases, which will range from 23 cents to $1.50 per hour, will affect 8 million workers.

The state poised to provide the highest minimum pay rate is Washington, at $15.74 per hour, according to Wolters Kluwer.

Washington, D.C., and 13 states tie their minimum wages to the consumer price index, a government measure for the average change consumers pay for certain goods and services.

“There’s quite a few states across the country that will be seeing quite big jumps in the minimum wage because of the higher rate of inflation this past year,” said Deirdre Kennedy, senior payroll analyst at Wolters Kluwer.

Other states will continue to phase in increases passed through legislation. States that are not seeing minimum wage hikes in 2023 still tie their base pay to the $7.25 per hour federal rate.

President Joe Biden has campaigned to raise the federal minimum wage to $15 per hour. He signed an executive order in 2022 raising it to that level for federal workers and contractors.

But a broader change to $15 per hour nationally would have to be done through Congress. Efforts to raise the rate nationally failed to make it into Covid-19 relief legislation in 2021.

“As the gap between that and the federal minimum wage increases, it will be interesting to see if that can kind of spur more momentum for more states to increase their wages or try and get more momentum on the federal level,” said Kevin Werner, research associate at the Income and Benefits Policy Center at the Urban Institute.

Raising the minimum wage nationally to $15 per hour would affect 56 million workers, according to an Urban Institute report released in September.

The research modeled possible results where a new $15 minimum wage resulted in either no job losses or two different scenarios where extended job losses occurred.

“Even in our highest job loss scenario, we still found that on average, the average worker was better off and that poverty declined overall,” Werner said.

“Even though some individual people who lost their jobs may have been worse off, the net effect was still positive,” he said.

The majority of workers who would be affected by a $15 minimum wage are over the age of 25, according to Werner. About one-third are the sole income earners for their families.

Workers who depend on the minimum wage are also much more likely to be people of color living in poverty. Consequently, raising the minimum pay nationally would help vulnerable people, Werner said.

“Putting needed raises in minimum wage workers’ pockets [is] really the most efficient way you can boost the economy,” Sklar said. “Those are the people who have to go right back around and spend it.”

With federal action to raise the minimum wage uncertain, some big-name companies have already stepped up to raise their pay rates.

Costco has raised its minimum wage for U.S. store workers to $16 per hour, while Target, Amazon, and Walmart have all moved to pay hourly workers $15 per hour.

As the economy has continued to open up following the Covid shutdown, competition for workers has prompted employers to offer higher wages and starting bonuses for workers on the lower end of the income spectrum, Werner noted.

“It’s giving low-income workers more leverage than they had before,” he said.