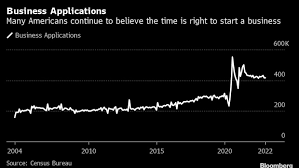 (Bloomberg) — More than 5 million businesses were created in the US last year, a sign that the entrepreneurship boom spawned by the pandemic may be long-lasting.

New business applications rose by 44% from 2019 to 2022, with the sharpest increases in Southern states, according to US Census Bureau figures released Tuesday.

Bound at home at the outset of the Covid-19 pandemic, millions of Americans started a business either out of necessity after losing their jobs or because remote work opened up opportunities. Following the initial spike in 2020, business creation has been plateauing at a much higher level than pre-pandemic, the Census numbers show.

On average, it means that almost 14,000 businesses were created every day in 2022, according to the data, which tracks Federal Tax Identification Numbers, or unique nine-digit numbers assigned for tax purposes.

Business applications in the South — where many Americans migrated in recent years — are up by 53% from 2019. Other regions such as New England are below the national growth average.

The White House touted the business applications numbers, saying that they build on other strong government figures released recently.

“When you look at these numbers — from business applications to job growth to unemployment — you are seeing resilience and solid labor market performance,” White House adviser Gene Sperling told reporters Tuesday.