Home » Inflation rose 9.1% in June, even more than expected, as consumer pressures intensify

Inflation rose 9.1% in June, even more than expected, as consumer pressures intensify 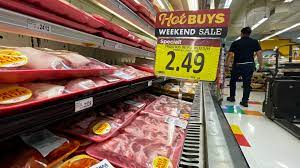 The consumer price index increased 9.1% from a year ago in June, above
the 8.8% Dow Jones estimate.
Excluding food and energy, core CPI rose 5.9%, compared with the 5.7% estimate.
Costs surged for gasoline, groceries, rent, and dental care.
Adjusted for inflation, workers’ hourly wages fell 1% during the month
and are down 3.6% from a year ago.

Shoppers paid sharply higher prices for a variety of goods in June as
inflation kept its hold on a slowing U.S. economy, the Bureau of Labor
Statistics reported Wednesday.

The consumer price index, a broad measure of everyday goods and
services related to the cost of living, soared 9.1% from a year ago,
above the 8.8% Dow Jones estimate. That marked the fastest pace for
inflation going back to November 1981.

Excluding volatile food and energy prices, the so-called core CPI
increased 5.9%, compared with the 5.7% estimate. Core inflation peaked
at 6.5% in March and has been nudging down since.

Taken together, the numbers seemed to counter the narrative that
inflation may be peaking, as the gains were based across a variety of
categories.

“CPI delivered another shock, and as painful as June’s higher number
is, equally as bad is the broadening sources of inflation,” said
Robert Frick, corporate economist at Navy Federal Credit Union.
“Though CPI’s spike is led by energy and food prices, which are
largely global problems, prices continue to mount for domestic goods
and services, from shelter to autos to apparel.”

The inflation reading could push the Federal Reserve into an even more
aggressive position.

Traders upped their bets on the pace of interest rate increases ahead.
For the July 26-27 meeting, a full percentage point move now has a
better than even chance of happening, according to the CME Group’s
FedWatch tool as of 10:40 a.m. ET.

“U.S. inflation is above 9%, but it is the breadth of the price
pressures that are really concerning for the Federal Reserve,” said
James Knightley, ING’s chief international economist. “With supply
conditions showing little sign of improvement the onus is then on the
Fed to hit the brakes via higher rates to allow demand to better match
supply conditions. The recession threat is rising.”

Up across the board

Energy prices surged 7.5% on the month and were up 41.6% on a 12-month
basis. The food index increased 1%, while shelter costs, which make up
about one-third of the CPI rose 0.6% for the month and were up 5.6%
annually. This was the sixth straight month that food at home rose at
least 1%.

Rental costs rose 0.8% in June, the largest monthly increase since
April 1986, according to the BLS.

Much of the inflation rise came from gasoline prices, which increased
11.2% on the month and just shy of 60% for the 12-month period.
Electricity costs rose 1.7% and 13.7%, respectively. New and used
vehicle prices posted respective monthly gains of 0.7% and 1.6%.

Medical-care costs climbed 0.7% on the month, propelled by a 1.9%
increase in dental services, the largest monthly rise ever recorded
for that sector in data that goes back to 1995.

Airline fares were one of the few areas seeing a decline, falling 1.8%
in June though still up 34.1% from a year ago. The meat, poultry,
fish, and eggs category also dropped 0.4% for the month but is up
11.7% on an annual basis.

The increases marked another tough month for consumers, who have been
suffering through soaring prices for everything from airline tickets
to used cars to bacon and eggs.

For workers, the numbers meant another hit to the wallet, as
inflation-adjusted incomes, based on average hourly earnings, fell 1%
for the month and were down 3.6% from a year ago, according to a
separate BLS release.

Policymakers have struggled to come up with an answer to a situation
that is rooted in multiple factors, including clogged supply chains,
outsized demand for goods over services, and trillions of dollars in
Covid-related stimulus spending that has made consumers both flush
with cash and confronted with the highest prices since the early days
of the Reagan administration.

Federal Reserve officials have instituted a series of interest rate
increases that have taken benchmark short-term borrowing costs up by
1.5 percentage points. The central bank is expected to continue hiking
until inflation comes closer to its 2% longer-run target rate.

White House officials have blamed the uptick in prices on Russia’s
invasion of Ukraine, though inflation was already moving aggressively
higher before that attack in February. President Joe Biden has called
on gas station owners to lower prices.

The administration and leading Democrats also have blamed what they
call greedy corporations for using the pandemic as an excuse to raise
prices. After-tax corporate profits, however, have increased just 1.3%
in aggregate since the second quarter of 2021, when inflation took
hold.

In a statement following the report, Biden said “tackling inflation is
my top priority,” and repeated previous calls for oil and gas
companies to lower prices and Congress to vote on legislation he said
will reduce costs for various products and services.

There is some reason to think the July inflation numbers will cool.

Gasoline prices have come down from their June peak, with a gallon of
regular falling to $4.64, a 4.7% drop for the month, according to
Energy Information Administration data.

The S&P GSCI commodities index, a broad-based measure of prices for
multiple goods, has fallen 7.3% in July, though it remains up 17.2%
for the year. That has come as wheat futures have fallen 8% since July
1, while soybeans are down 6% and corn is off 6.6% during the same
period.

View from the trucking industry

“I see a light at the end of the tunnel,” said Brian Antonellis,
senior vice president of fleet operations for Fleet Advantage, a
leasing and asset management company for the trucking industry based
in Fort Lauderdale, Florida.

Antonellis expects production capacity to ramp up gradually, helping
to create a more competitive environment for an industry that has felt
the strain of rising fuel prices, a historically tight labor market,
and the supply chain issues that have hampered the ability to get
products to shelves.

“For probably 10 to 15 years before the pandemic, the industry fell
into a stable routine where costs up across the board somewhere
between 1 to 3 percent a year. It was easy to budget, it was easy to
forecast, it was easy to build into rates,” he said. “The challenge we
face today is it’s not that 1-3 percent anymore, it’s 10 to 20 percent
depending on what cost bucket you’re talking about.”

Still, he said trucking companies are managing to get through with
pricing power and creative financing.

“I do think people honestly are not trying to overcharge the
customer,” Antonellis said. “They’re not being predatory about it. But
they are trying to find that fine line. What do we pass forward? How
do we look at the costs coming in?”

With the U.S. economic picture getting increasingly cloudy, he
acknowledged that the industry is not “recession-proof.”

“There are going to be challenged,” Antonellis said. “I don’t think
it’s all negative. I do think there will be challenges for the next
six months. But I do think we’re on an upswing.”