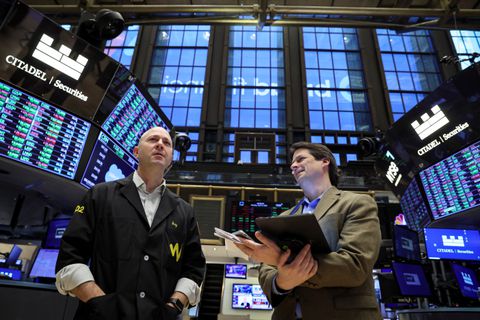 Hopeful economic signs compete with challenges to profits including inflation, rising rates, and a strong dollar

While some corporate leaders noted glimmers of hope for consumers and the economy, many have reported a host of challenges to profits, including persistent inflation, rising interest rates, and a generational surge in the dollar that has pressured revenue generated overseas.

So far, fewer companies than usual are beating Wall Street’s earnings expectations. With about 20% of companies in the S&P 500 having reported third-quarter results, 72% have topped analysts’ consensus earnings estimates, according to FactSet. That is below the five-year average of 77%.

Investors are also punishing corporations that miss the mark. Shares of S&P 500 companies that have underperformed Wall Street’s earnings expectations have slipped 4.7% on average from the two days before their report through the two days after, according to FactSet. That compares with the five-year average of 2.2%.

Even some earnings beats aren’t wowing investors as much as usual. Tesla Inc., for example, topped consensus earnings estimates, yet shares dropped 6.7% in the session after the electric-vehicle maker’s report.

“The bar was set really low going into earnings season,” said Gene Goldman, chief investment officer at Cetera Investment Management. “We were hoping for easier beats because everything had been revised lower, but the earnings releases we’re seeing now have not been that great.”

The quarterly reporting period marks the latest test for stocks battered by this year’s brutal market conditions. Tumbling bond prices and surging yields have recalibrated investors’ appetite for riskier assets. The S&P 500 is on pace for its worst year since the 2007-08 financial crisis.

The stakes get higher in the week ahead as investors enter one of the busiest periods of the earnings season. Mega cap technology companies that dominate U.S. stock markets are set to deliver results, including Google parent Alphabet Inc., Microsoft Corp., Facebook parent Meta Platforms Inc., and Amazon.com Inc.

Investors are also awaiting the latest readings on inflation and the economy for signs the Federal Reserve could be ready to slow the pace of its monetary tightening soon. The central bank’s preferred inflation gauge is slated for release next week, as are preliminary figures for third-quarter gross domestic product.

The Fed is set to raise interest rates by another 0.75 percentage point at its next meeting in November, but policymakers are considering a smaller half-point increment in December, The Wall Street Journal reported Friday. That helped boost stocks—the S&P 500 jumped 2.4% Friday, notching a weekly gain of 4.7%.

The attention on the Fed during the continuing third-quarter earnings season recalls the second-quarter reporting period a few months back. Stocks staged a 17% rebound this summer due in part to investors’ belief that inflation had peaked and that the Fed would soon pivot from raising rates to lowering them—a rally that fizzled after a reset in Fed policy forecasts.

“Going into this earnings season, it’s all about the macro,” said Larry Adam, a chief investment officer of Raymond James.

Others—in key sectors such as shipping—highlighted the difficult business environment.

Many companies so far have been able to pass on higher costs to consumers, but some investors wonder how long corporations can continue to lift prices. Procter & Gamble Co., for example, beat Wall Street expectations in its latest report as price increases offset declining volumes. However, the maker of Tide detergent and Crest toothpaste forecasts a slowdown in organic sales growth for the rest of the fiscal year as consumers’ willingness to pay more for products gets tested.

Increasingly, multinational companies are warning of a blow from currency markets. A strong dollar can hurt U.S. companies that sell goods abroad by making their products less affordable to overseas buyers. The WSJ Dollar Index, which measures the dollar against a basket of 16 currencies, has surged 16% this year.

Analysts cut their expectations for third-quarter earnings by the biggest margin since the early throes of the Covid-19 pandemic, according to FactSet. At the end of March, analysts expected S&P 500 companies’ profits to grow 9.5% in the third quarter from the year prior. Now they see 1.5% quarterly earnings growth.

But many market watchers say the challenges suggest earnings estimates could come down even more, particularly for next year. Analysts see S&P 500 profits growing roughly 7% year-over-year in 2023.

“Analysts might be too optimistic,” said Ken Leon, director of equity research at CFRA. “They’re going to have to take an honest look at their projections for 2023.”

Falling profits would threaten a recent decline in stock prices relative to companies’ earnings, a ratio Wall Street uses to gauge if shares are cheap or expensive. Companies in the S&P 500 are trading at around 15.6 times their projected earnings over the next 12 months, according to FactSet. That is down from more than 21 times at the end of last year and below the 10-year average of about 17, a decline that had mitigated some of the most-acute worries about stretched valuations.

“If the earnings come down, then it’s harder to make the statement that the market is reasonably valued,” said Leo Grohowski, chief investment officer at BNY Mellon Wealth Management.