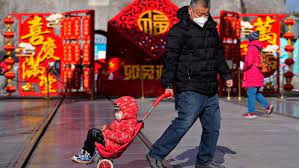 China’s population fell in 2022 for the first time in decades a historic shift that is expected to have long-term consequences for the domestic and global economies.

The world’s most populous country has long been a crucial source of labour and demand, fuelling growth in China and the world.

“This is a truly historic turning point, an onset of a long-term and irreversible population decline,” said Wang Feng, an expert on Chinese demographic change at the University of California, Irvine.

The decline officially began last year, when deaths outstripped births, but some demographers argue that the trend is likely to have started before then.

China’s strict zero-Covid policy of containing coronavirus is widely seen to have accelerated the fall in the country’s birth rate, as couples delayed or decided against having children during the health crisis and economic slowdown. Last year, 9.56mn babies were born, down from 10.62mn the previous year.

Baby goods and other maternity-related Chinese stocks sold off sharply following the announcement, with Kidswant Children Products down as much as 8.5 per cent and Ningbo David Medical Device, which produces incubators, falling as much as 11 per cent. In Hong Kong, baby formula producer China Feihe fell as much as 3 per cent.

The decline has roots in Beijing’s one-child policy imposed in 1980, which limited the number of children a couple could have to below the average of 2.1 needed for a country’s population to remain stable.

Authorities scrapped the policy in 2016, replacing it with a two-child limit, but the number of births has fallen every year since then.

Fuxian Yi, a demographer at the University of Wisconsin-Madison, estimated that China’s population started to fall in 2018, but the drop was obscured by “faulty demographic data”.

“China is facing a demographic crisis that far exceeds the imagination of Chinese authorities and the international community,” Yi said, noting that the trend would act as a long-term drag on the country’s property market, a crucial engine of growth.

“China cannot rely on the demographic dividend as a structural driver for economic growth,” said Zhiwei Zhang, president and chief economist at Pinpoint Asset Management. “Economic growth will have to depend more on productivity growth, which is driven by government policies.”

Some economists argue that the rise of automation will counteract rising labour costs as the number of workers shrinks. The NBS’s Kang said that China’s population fall should not be a cause for concern because labour supply still exceeded demand and the long-term decline in workers would be offset as the “labour quality improves” and education levels rise.

But analysts are largely in agreement that the country’s social welfare and medical infrastructure are ill-prepared for an ageing population.

China’s sudden exit from its strict zero-Covid policy last month and the surge of infections that followed rapidly overwhelmed hospitals. Wang said this should serve as a “wake-up call for China to speed up reforms of its still highly inefficient and unequal healthcare system”.

China’s demographic turning point puts it on the same path as Japan, where the population began to decline in 2010 and has fallen every year since.

The UN’s 2022 estimates also project that India will overtake China as the world’s most populous nation this year. India’s population now stands at 1.4066bn.