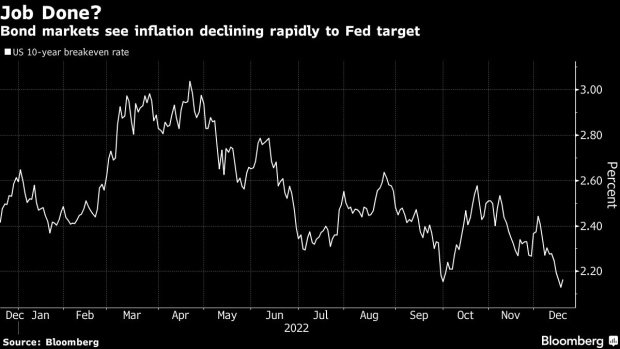 BlackRock Inc. thinks markets are too complacent about inflation staying high for longer and is maximizing assets by hedging that risk.

While its strategists acknowledge that a decline in US prices is playing out faster than expected, they are sticking to a view that inflation will remain above central bank targets. That’s leading the world’s biggest asset manager to recommend being underweight on government bonds in favor of inflation-linked debt and investment-grade credit next year.

Scott Thiel, its chief fixed-income strategist, sees US inflation only easing to 3.50% toward the end of 2023 amid persistent labor shortages, higher wages, and falling inventories. The market, however, is pricing inflation much closer to the Federal Reserve’s 2% target, with one-year consumer-price index swaps at 2.38% and 10-year breakevens at 2.14%.

“We simply think that is too low,” said Thiel in an interview. “Volatility in the CPI numbers is something that the market should expect. It’s going to be hard to call month-on-month. But it’s probably easier to come down from 7% to 5% than from 5% to 3%.”

BlackRock expects the Fed will raise interest rates to 5% in the first half of 2023 before inflation settles around 3% longer-term. The market’s inflation expectations, as measured by bond breakeven rates, have plunged after data last week showed a key gauge of US consumer prices posted the smallest monthly advance in more than a year.

The Fed has already hiked borrowing costs aggressively to combat the worst inflation in decades, with the key question in markets being when rates will peak.

Thiel sees longer-term structural shifts that will keep inflation elevated. That means there is no reason for the Fed to be “anything but hawkish” for now, he said. US and European policymakers alike warned last week that rates have further to go than markets expect.

“Looking ahead, geopolitical risk, demographics, and a transition to net zero will keep inflation high,” said Thiel. “Should policy rates come down from 5% to 3% over the next two years? Not in that environment.”

BlackRock suggested in its outlook report last month that investors go “maximum overweight” on inflation-protected securities in longer-term strategic portfolios. While global inflation-protected bonds are among the worst-performing fixed-income securities this year, there are signs of a turnaround as they head for the first positive quarter in a year.

BlackRock is also recommending being underweight government bonds as Thiel said they will provide little protection in this environment. Long-dated yields may have underpriced the risk of rates staying high for longer and the fact that central banks will have to reduce their massive crisis-era bond holdings, increasing the supply of debt.

“Yields will have to go higher,” Thiel said.