Biden Close to Rollback of Chinese Tariffs to Fight Inflation 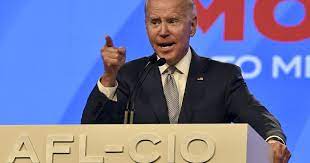 President Joe Biden may announce as soon as this week a rollback of
some US tariffs on Chinese consumer goods — as well as a new probe
into industrial subsidies that could lead to more duties in strategic
areas like technology.

Biden has not yet made a final decision, and the timing could slip,
according to people familiar with the deliberations, who asked not to
be identified without permission to discuss private conversations.

It would mark his first major policy step on trade ties between the
world’s two biggest economic powers. The president in recent weeks
held a number of meetings with senior economic advisers where options
for a decision on the Trump-era tariffs were discussed, according to
the people.

Hints that the Biden administration is considering an easing in some
of the tariffs on $300 billion in Chinese imports have multiplied as
inflation has accelerated, putting pressure on US officials to find
ways to tamp down prices paid by consumers for everyday merchandise.

Biden said last month he’ll be talking to Chinese President Xi Jinping
“soon” and told reporters he was “in the process” of making up his
mind about whether to lift tariffs.

Some members of Biden’s Cabinet suggested he use the upcoming call
with Xi to ask him for reciprocal tariff cuts on American goods
currently facing import duties, though that idea was quickly shot
down, the people said.

A White House spokeswoman said no decision on the tariffs has been
made but the administration wants to ensure they are aligned with
“economic and strategic” priorities and don’t unnecessarily raise
costs for Americans.

The Wall Street Journal previously reported a decision could come as
soon as this week.

The Biden administration said in May it was taking the first step
toward a review of the tariffs, a process required to keep them from
starting to expire in July. Industries that have benefited from duties
imposed under former President Donald Trump have until July 6 to
comment and request an extension of the levies.

Tariffs, by percentage rate, imposed by the U.S. and China on each
other since March 2018

US Treasury Secretary Janet Yellen said June 8 that the administration
is looking to “reconfigure” Trump-era tariffs, imposed on Chinese
goods under what’s known as Section 301 of the Trade Act of 1974, that
“really weren’t designed to serve our strategic interests.”

Trump used Section 301 to hit China with the tariffs starting in July
2018 after an investigation concluded China stole intellectual
property from American companies and forced them to transfer
technology.

Some existing tariffs have hurt American consumers and businesses,
even though tariff policy isn’t a cure-all for inflation, Yellen told
lawmakers.

Commerce Secretary Gina Raimondo last month said the administration
had decided to keep tariffs on steel and aluminum but was considering
dropping them on other goods.

“There are other products — household goods, bicycles — it may make
sense,” she said June 5 on CNN’s “State of the Union.”

U.S. Trade Representative Katherine Tai, on the other hand, has made
clear she’s not convinced that any tariff moves would have an impact
on price pressures. In a recent congressional hearing, she told
lawmakers “with respect to short term challenges, there’s a limit to
what we can do with respect to, especially inflation.”

And Biden is running the risk of irking unions as he mulls lifting
some of the tariffs. Labor unions have opposed any such move, saying
the levies help protect US factory jobs. Biden has repeatedly pledged
to be the most pro-union president in US history, and Democrats are
counting on labor support in key mid-term Congressional elections in
November.

The White House has asked retail companies for a commitment to lower
prices following any tariff cuts but executives rebuffed that request
and told US officials it was an unrealistic expectation, the people
said.

The Biden administration has been weighing a new investigation into
Chinese subsidies and their damage to the U.S. economy as a way to
pressure Beijing on trade. That followed a phone call at the time
between Biden and Xi in which Biden expressed frustration with the
level of China’s engagement with his team.

While China’s economy has been hemmed in by Covid-related shutdowns,
Chinese exports to the US in the first five months of 2022 in dollar
terms grew 15.1% on the year while imports rose 4%, according to
official data.